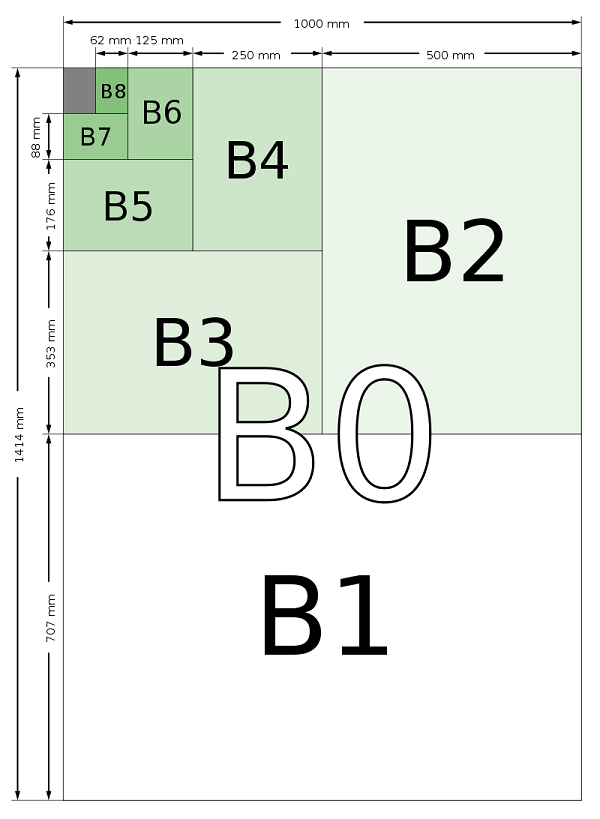 ISO 216 is an international standard is a universal standard all over the world except in North America (the United States and Canada) and parts of Latin America. All ISO 216 paper sizes (except some envelopes) have the same aspect ratio, √2:1. The B series is also one of the commonly used sizes. Different from the A series paper, the B series is defined as follows: A subsidiary series of sizes is obtained by placing the geometrical means between adjacent sizes of the A series in sequence. The use of the geometric mean makes each step in size: B0, A0, B1, A1, B2 ... smaller than the previous one by the same factor. As with the A series, the lengths of the B series have the ratio √2, and folding one in half (and rounding down to the nearest millimetre) gives the next in the series. The shorter side of B0 is exactly 1 metre. B series paper is mainly used for books, posters and envelopes, etc.

Among the A series papers, B0-B10 are more common, and B11, B12, B13 papers are too large, resulting in few usage scenarios, so they are not commonly used.

Each ISO paper size is half the area of the next larger size paper in the same series, as shown in the figure. The following table lists the size of all B series paper (B0-B13) in mm, cm and inches